As we have already mentioned on other occasions, Windows 10 itself has its own powerful functionality for taking screenshots. Despite all this, many continue to use third-party solutions for these capture tasks.

Well, the same happens when we refer to recording a video from what is happening on our screen. Many use software solutions external to the operating system itself , when this is something that we can achieve without installing anything. In addition, it must be taken into account that this type of practice is becoming more and more common.

To a large extent this is due to the fact that we have much more powerful hardware components to be able to work with video in the best way. At the same time, we cannot forget the help of having the good Internet connections that we now have. These help us to share all kinds of content quickly, including the aforementioned videos, via streaming.

Windows 10 has its own function to record videos

These recordings in video form of what happens on our desktop, we can use them for multiple tasks. For example, they can be used to create our own tutorials to upload to YouTube, to capture events that happen on the PC, or to record games.

Therefore, below or we are going to show how to use the Windows 10 screen recording tool. The truth is that a large part of the users of the operating system are unaware of its existence, but it can be very useful for some types of use. For example, as we mentioned before, when recording our games. Thus, without using external solutions, we record these own contents to later share them on specific gaming platforms, for example. 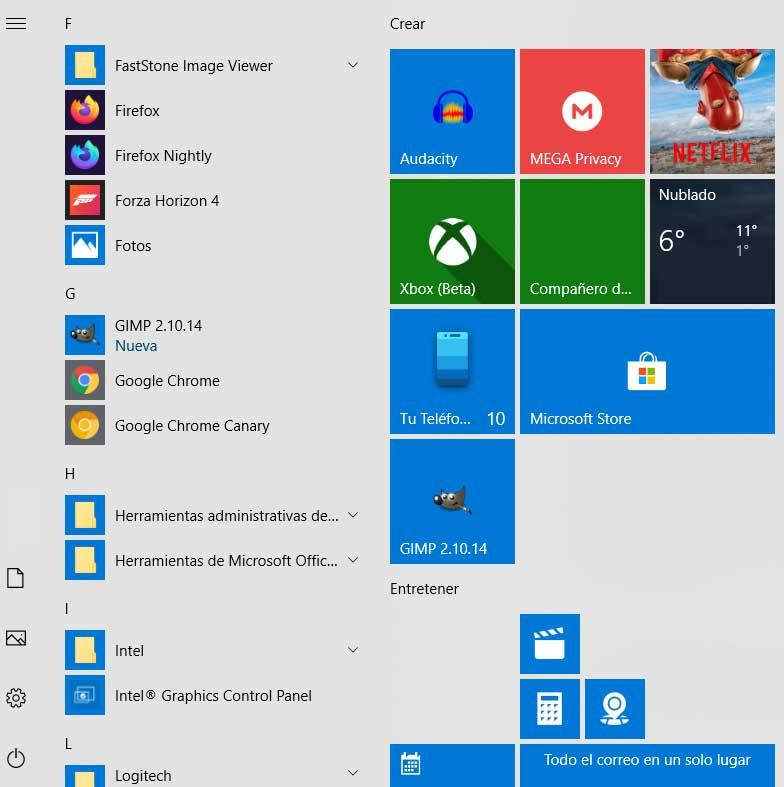 To say that at first, if we take a look at the applications in the Start menu, we will not find any reference to this screen recorder. In fact, this functionality is not there. This is because instead of making the screen recorder a standalone app, Microsoft included it as a feature of the Xbox Game Bar in Windows 10. Of course, it is not necessary that we have an Xbox console to make use of the so-called Windows 10 Game Bar. Therefore, if we need a free and easy-to-use screen recorder for our games on Windows, it is worth taking a look at this.

Record what happens on your screen in Windows 10

Therefore, to achieve what we propose here, the first thing we must do is access the Xbox Game Bar. This is something we achieve by using the Win + G key combination at the same time.

Then the Game Bar will appear on the desktop, at the top center, and it is likely that in addition to the main bar, other windows will appear. These refer to the Performance of the team, for example, an audio one, or the one corresponding to Xbox Social. But in this case what interests us is to use the recording functionality . Therefore, to access it, we click on the central button that is represented by a camera. 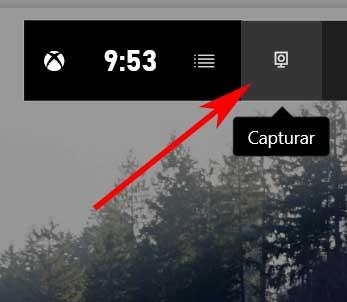 Thus, a new window will appear, which is the one corresponding to the recording function that interests us in these lines. On the left side of it, we find a button to make a fixed screenshot, but the one that interests us is the one represented by a circle. Say that this will not be active when we have the focus on the desktop or in File Explorer. 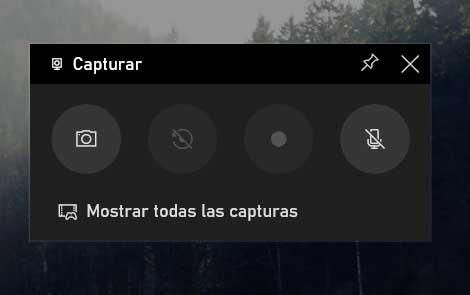 Therefore, if we want to record a game of any game, the first thing to do will be to execute it so that it can start up. Then we will see that we can start a recording by clicking on the circle button (Record), which will already be active. In this way, the capture will continue until we press the Stop button in the floating panel that appears during recording. 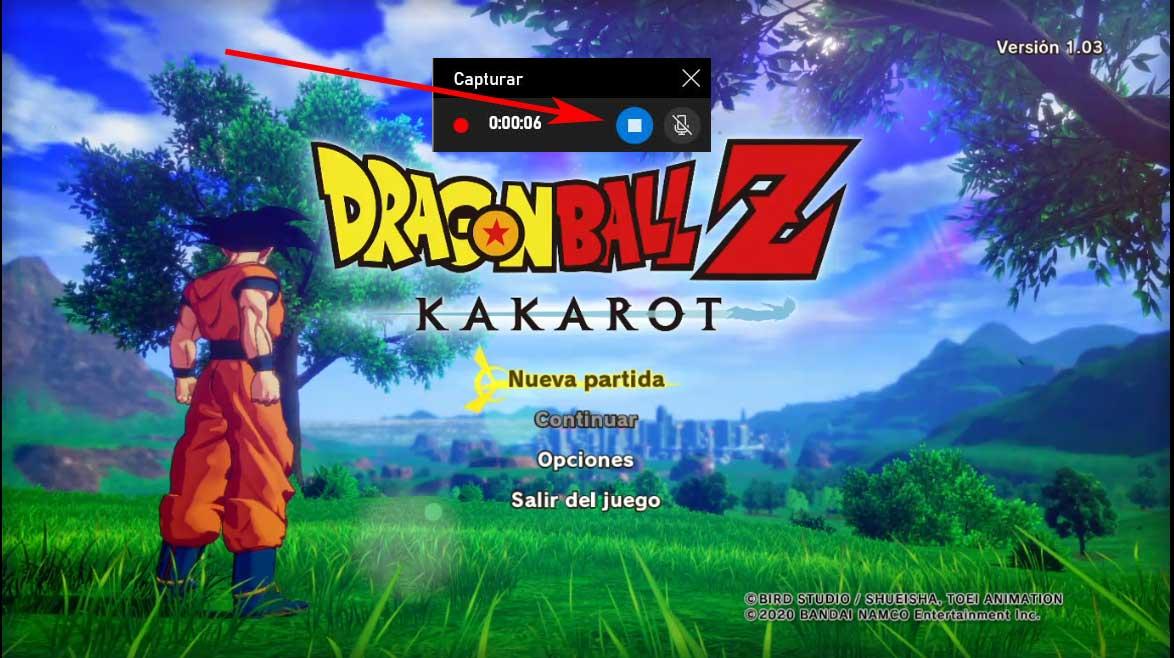 It is also interesting to know that we can start a recording at any time by pressing the key combination Win + Alt + R simultaneously. As you can imagine, this eliminates the need to start the Xbox Game Bar first . Another important fact that we must take into consideration is that the recordings are saved in MP4 format. They can also be accessed from the Gallery section of the Toolbar. At the same time, if we want to manage these recordings in a more effective way, we can go to the disk path This computer / Videos / Captures of the user folder.

Get the most out of the Xbox Game Bar

Of course, we can customize this screen recording task a bit, accessing the Game Bar again, and clicking on the Settings button . This is the one on the right side of it, so a new window appears so that we can go to the Capturing option. 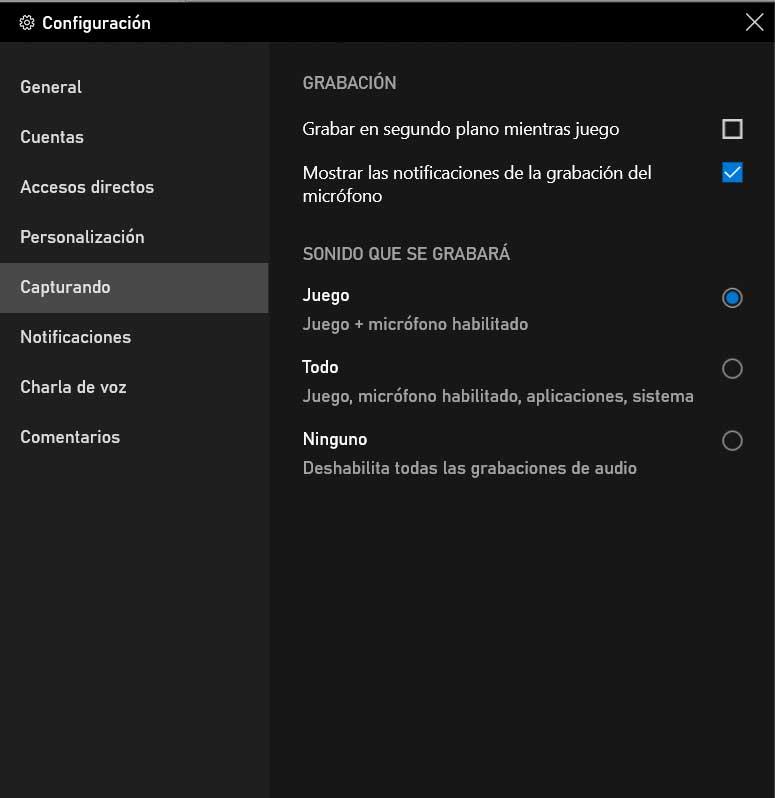 As we can see in the window that appears below, from here we can specify the recording in the background in the middle of the game, or if we want to also capture the audio. This is an important point, all depending on what we plan to do with the resulting video. Thus, we have an active microphone and we want to speak during the game and capture the voice, from this section we can indicate it.

Therefore, as we can see, thanks to the Windows 10 Game Bar, we will have at our disposal a powerful tool for recording games. It is true that it may not have as many configurable options as those that we can find in other third-party solutions. But yes, for those users who want to record what happens on their screen, whether they are games or not, without complications, this functionality of Windows 10 is perfect. Another very interesting option is to use this function by recording what happens in the web browser, for example.

What’s more, being fully integrated into the operating system itself , its operation will be much more fluid than what we can find in other external solutions. In fact we can say that when it is in full recording, it hardly consumes computer resources, contrary to what happens with other programs of this type. 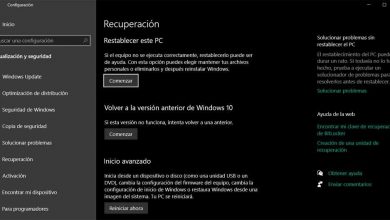 How to remove or disable notification sounds in Windows 10 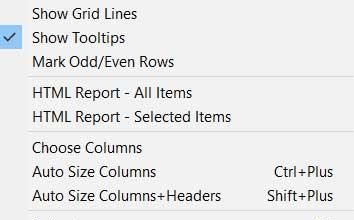 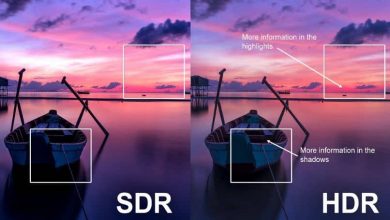 How to enable HDR video playback in Windows 10? – Very easy 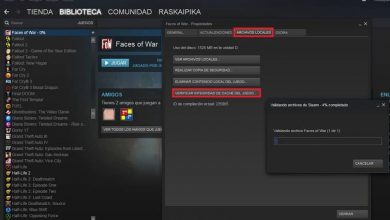 How to download and fix STEAM_API.DLL error in Windows 10, 8 and 7 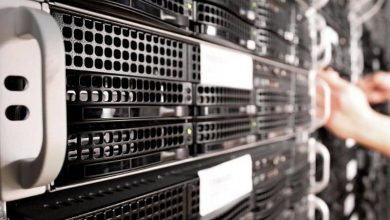 How to remotely manage a server with Windows 10 RSAT