The graphical user interface that the Windows operating system currently presents to us is suitable for all types of users. It has been designed to facilitate work for both the more advanced and beginners in front of a PC. But we can always use the command line or CMD if we wish and do without it.

We must bear in mind that on a day-to-day basis with the computer we find ourselves with a complete and complex operating system. This has not stopped growing over the years and its new versions, but of course, Microsoft itself tries to make things much easier for us. For this, as we mentioned, it also improves the graphical user interface so that the system can use it and configure it without problems almost everyone.

But of course, as is usual in most areas related to software, some more advanced always require more control. Of course, Microsoft could not be left behind in this sense, for what the command line offers us. We can access this through the command line also known as CMD, or from Windows PowerShell.

What is the command line or CMD

For those of you who do not know what we are talking about in these lines, it should be clear that this is not about anything else but a command line from which we can carry out multiple tasks based on written commands. These are generally executed internally and automatically when performing all kinds of actions in the aforementioned graphical interface. However, from the CMD more advanced users will have much more control over all this.

As a curiosity we will tell you that the CMD we refer to is the abbreviation of CoMmanD and it is a Microsoft program that comes from the mythical command.com. This is the MSDOS shell that has been around for decades, in a more or less visible way. In the early days of Microsoft’s operating system, everything worked based on commands like the ones we are going to show you in these lines. But with the passage of time this has been falling into disuse passing to the more comfortable and visual graphical interfaces.

In this way, from this section we will be able to carry out a multitude of tasks in the system, all this by typing direct commands to it.

How to open the Windows CMD

Therefore, for those of you who are interested in discovering this section of the Redmond operating system , we will tell you how to run it. First of all you have to know that it is part of Windows itself, we just have to start it. For this we must go to the search box of the Start menu, for example, and write CMD. 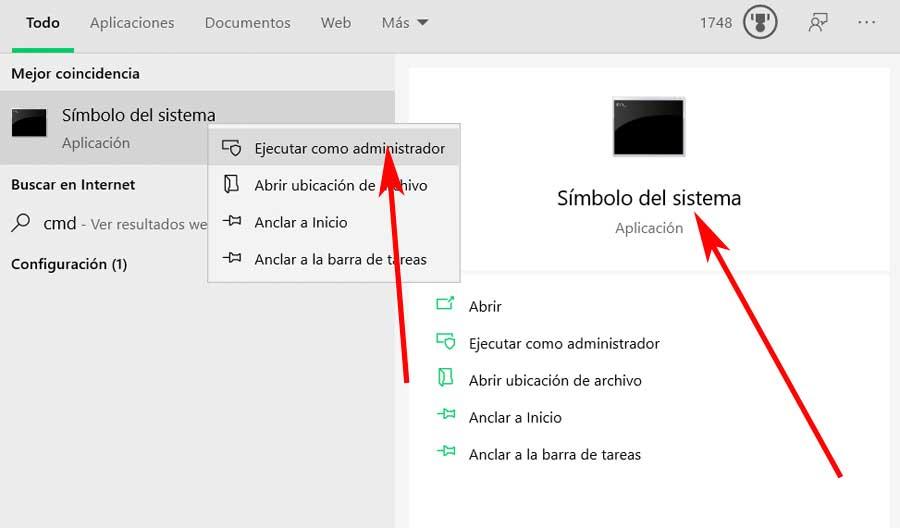 Something that we must bear in mind once we have reached this point, is the way in which we execute this Windows functionality. And it is that as it happens with the rest of applications that we have installed in the PC, the CMD can be executed in different ways. In just we open the file in a conventional way, we access the command prompt window with certain permissions blocked. This can be very useful so that we cannot make dangerous changes that could even damage Windows itself.

But on the other hand, if we are users with some experience in the Redmond system, and we also know the power that CMD offers us, we should run it with administrator permissions . That, as you can imagine, gives us access to more advanced functions of Windows itself. These as a general rule will refer to more intense and therefore delicate changes that will allow us to fully adapt the operating system itself, all based on advanced commands. But as we mentioned before, for this it is preferable that we know very well what we are doing so as not to corrupt the software.

What is PowerShell and how does it differ from CMD

As we told you, the CMD or command symbol has been with us for many years, since the beginning of the Microsoft operating system. Initially the original MSDOS Shell and the default in Windows 10 was the same for a long time and was the system default option. But after the appearance of PowerShell, this changed a bit, as this improved version for executing commands went a bit further.

And it is necessary to bear in mind that Windows PowerShell allows us to carry out more complete and complex developments, jobs and executions, all based on commands. This element is an advanced scripting language written in the Microsoft .NET Framework that enables you to perform background tasks or automate tasks. Therefore, it could be said that it is an improved and more modern version of the mentioned CMD. Thus, to open it, as in the previous case, we write its name in the search box and we also execute with administrator permissions. 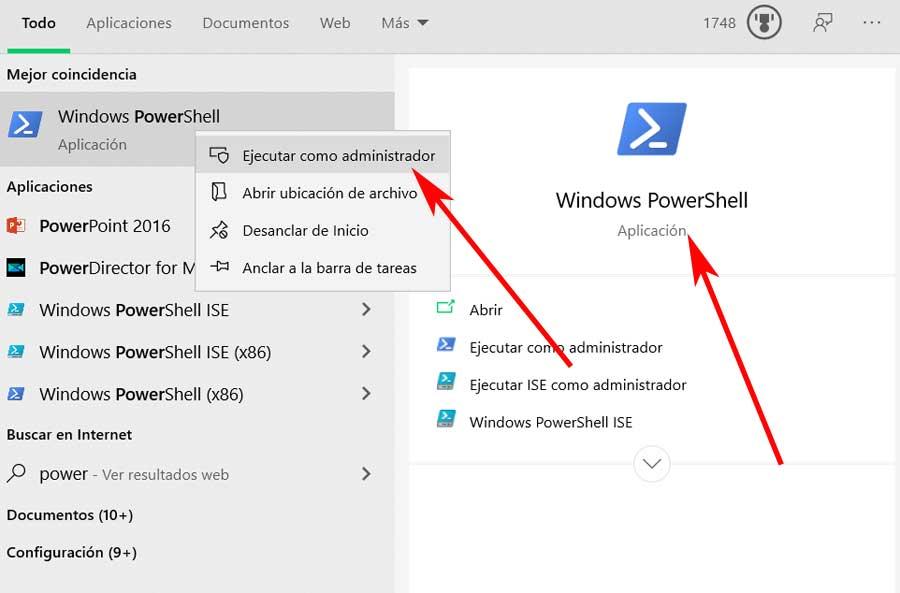 The most important basic commands of the CMD

As we get used to all this, we can go deeper with parameters that allow us to squeeze them a little more. Of course, something that we must bear in mind is that these parameters that we are talking about, you can see them by writing Help followed by the command from which we want to see those parameters.

Commands for working with files

These are CMD commands that focus on working and dealing with the files that we have stored on disk drives in many ways and in depth.

Commands for working with directories

If you want to know all the details of your Internet connection or the local network, these commands cannot be missing to execute from the CMD.

In this section we find a list of CMD commands to manage some very important parts regarding the operation and behavior of the operating system itself.

Other tricks for CMD

The above commands are fine, in theory. But what can we use them for? We are going to see some practical examples of commands that can help us make our day to day much more bearable.

The first thing we will have to do to be able to  change the DNS from CMD is to know the name of our network. We can easily do this by executing the following command: 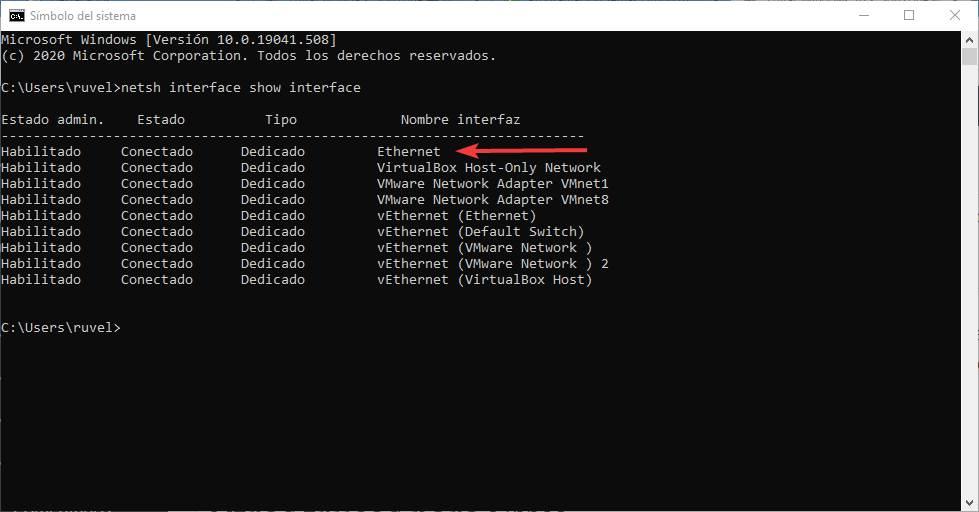 Once we know the name of the network, we can use the following command that will allow us to very easily change the DNS server of our computer from CMD (changing network_name by the name that we have known in the previous point0r, and IP_DNS by the IP of the Primary DNS we want to use):

To add a secondary DNS, we will simply execute the following command with the same changes:

Clever. Our computer will begin to use the new DNS. And, if we want, we can easily create a script (in bat) to change them at another time.

In addition, it is possible to know several CMD keyboard shortcuts that will allow us to move much more comfortably and quickly through the interface. 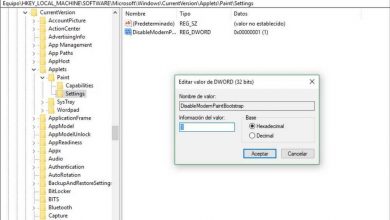 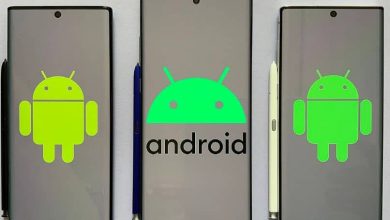 How to install MTK65xx Preloader usb vcom port driver in Windows 10, 8 and 7 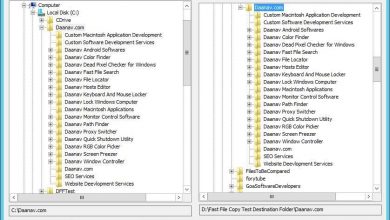 The speed ​​when copying files to usb drops to 0 bytes: how to fix it 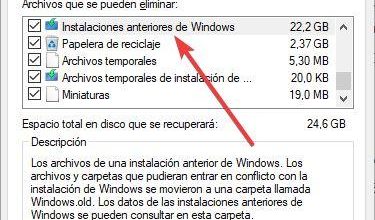 Prepare your computer to install the new version of windows 10