One of the most disputed topics on the entire internet will always be about which is the best browser, and despite all the tests that you can find on different pages it is good that you review the most recent results and above all that you have your own criteria .

But to evaluate which is the best, we must go beyond just knowing which is the fastest browser. In this sense, computer data consumption tests, JavaScript decompression capabilities, among others, come into account.

That is why in this article in a very partial way we will be able to observe how 4 browsers perform in different aspects and in the end we will have a clear notion of which is the best .

Next we are going to do a series of performance tests, together with a simple comparison between the 4 computers that we have chosen, and in these tests, the speed of code decompression and cryptography can be arbitrarily evaluated.

These are simple tests that include an evaluation of the speed of “Json” data exchange and can also be useful to diagnose a problem with JavaScript . 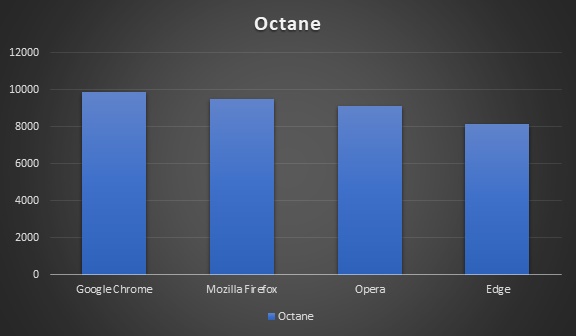 The first test is responsible for giving us a general performance result , evaluated in score, all the processes that each of the browsers performs when making a call to the proxy and loading a web page.

The crypto decompression speed is evaluated, as we can clearly see:

Although the difference is not so noticeable at the graphical level, if you can see the great disadvantage that Microsoft Edge has, which many presume is the best browser in both performance and speed.

We can also appreciate that Mozilla Firefox, which is touching the heels of Google Chrome, is gradually increasing its potential and its number of users, on the other hand we have the Navigator that operates which despite being little known is positioned very well on this list.

If you want to carry out this test on your own, this is the link you must access. But despite everything, it is still too early to make a judgment so let’s continue with the next test. 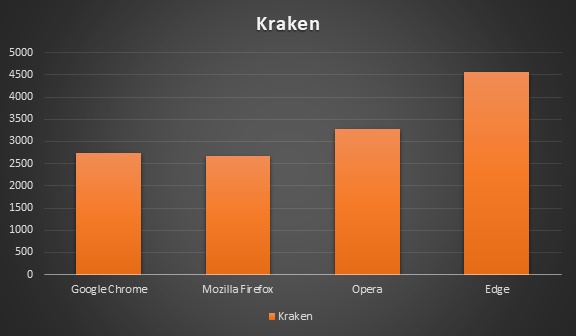 This is a benchmark that is responsible for making a more in-depth study of the operation and speed responses of JavaScript for each browser, so it is responsible for measuring the time in each process carried out in the different Scripts. In the end, it gives us a weight that is equal to the sum of all the milliseconds that it took the browser to carry out each process, in addition to the time taken in each process separately.

Therefore, on this occasion, the one with the highest weighting means that it took more time to carry out the test and the browser with the lowest weighting was faster performing the test.

Therefore, this graph is measured from lowest to highest, the results are as follows:

As we can see, Firefox is capable of surpassing Chrome in this test, which indicates that it has potential. On the other hand, Opera and Microsoft Edge are in the last places and have to improve in certain aspects not to be left behind. If you want to carry out this test on your own, this is the link you must access. 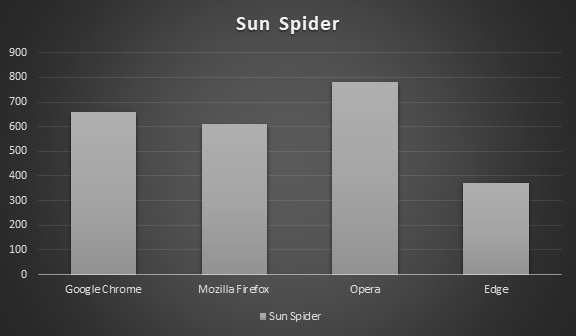 This is another benchmark which carries out a study of JavaScripts responses a little more exhaustive than the previous one, to evaluate the speed of data exchange, the dynamics is similar in the graph, where a lower result is a greater weight, since it is the speed with which each process is completed and added up at the end in milliseconds.

To everyone’s surprise, this time we have first of all:

From this test we can extract the fact that once again Google Chrome was below Mozilla Firefox, which partially suggests that it can also be surpassed. We can think of Opera that if you want to gain more users and become as well known as the other 3, you have to improve in several aspects. If you want to carry out this test on your own, this is the link you must access. 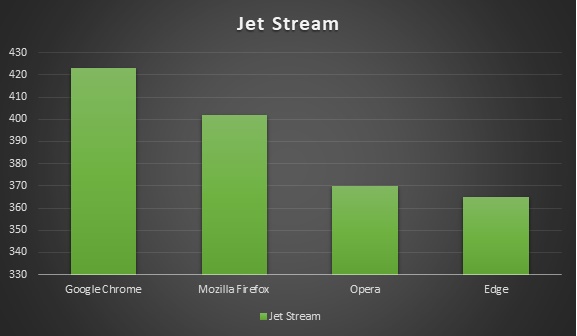 In this other page of tests that turns out to be homologated with Octane we will be able to measure in score, the vast majority of the processes carried out on each computer, it is a more complete test and therefore the longest of all, therefore the results are very distant from each other.

This particular test carries a lot of weight when making the final judgment:

If you want to do this test on your own, this is the link you must enter. 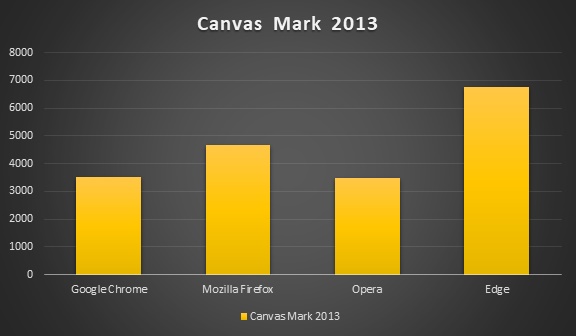 This particular test is responsible for measuring the ability to open and reproduce any type of visual content on each computer, for this they use different vectors, bitmaps and various objects and images in animation, this time we have to have our own criteria to know which is the best.

Test results: Because although the one that generated the highest score in this test was Microsoft Edge with 6764,  in turn it was the one that took the longest time to perform the test, while the others with the lowest score were faster, so we must establish in our mind the relationship between quality and time and decide what we prefer as users.

The following weights are: Mozilla Firefox with 4670, then Chrome with 3529 and finally we have Opera with 3497 . If you want to do this test on your own, this is the link you should go to to try it. 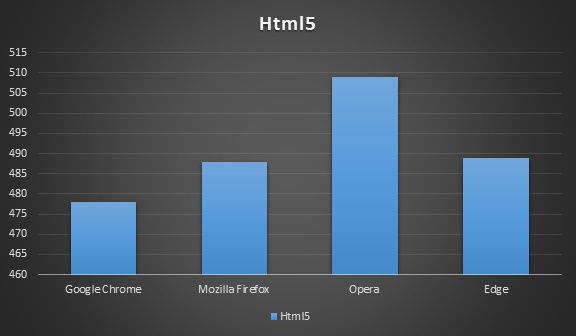 It is a test of compliance with standards, to verify the potential of syntax in a language as basic for web browsing as HTML5, it is a very simple test, the results below.

Apparently in this type of thing the browsers are all impeccable and the results are very similar, I only highlight Opera with a slight advantage. If you want to take this test on your own, this is the link you must access to take the test yourself. 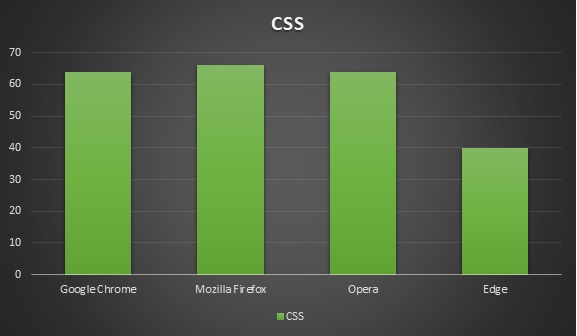 It is another test of compliance with standards, with which we can measure the ability of browsers to support specific features, and in this test we can see how browsers struggle to pass 2412 different tests that represent 100%.

Therefore, depending on the number of tests passed or rather of supported characteristics, it will give us a result in percentage, and this will be the one that we will show you in the graph. If you want to search for a specific property, go to the link and carry out the test yourself and below you will find all the evaluated characteristics and which ones were passed and which were not. If you want to carry out this test on your own, this is the link you must access.

The results are the following:

To carry out this last test we have used the Windows task manager, in which the data consumption of each application used can be observed exactly.

What we have done is open 4 tabs in each browser and we have started to play different videos in each one of them simultaneously, so that it will throw us the data with an average data consumption.

As for CPU for some reason consumption gives us these numbers:

As for RAM, we can see that Chrome’s consumption is higher than all the others, and this explains why when we open it, other processes on the computer can slow down, the lightest browser is undoubtedly Microsoft Edge .

But it should be noted that Google Chrome, although it has a high consumption of RAM, was one of the fastest when it came to playing the 4 videos in the test.

In conclusion and evaluating all the results:

* Note: I invite you to take the tests on your own so you can improve your criteria regarding this controversial issue, what results did you obtain in the different tests? Leave them in the comments! 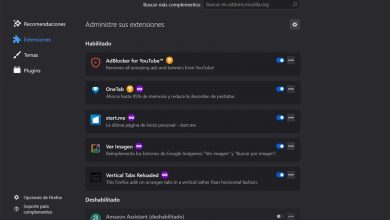 Get much more out of your browser using multiple profiles 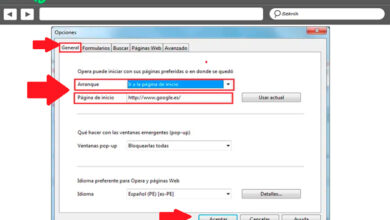 How to set google as our home page in the browser? Step by step guide 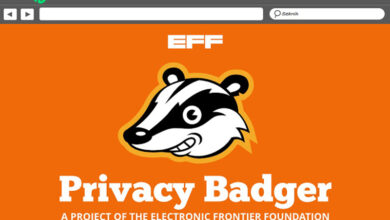 How to block third-party trackers and scripts to surf the internet more securely and privately? Step by step guide

Save ram memory with these tricks for google chrome 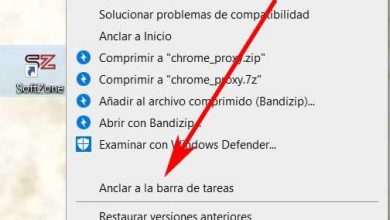 Have your favorite websites at hand thanks to the windows taskbar 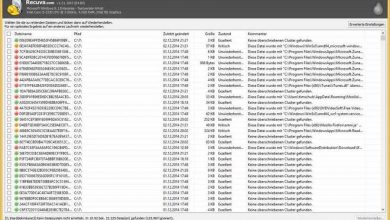