Over the years and versions of Windows, many system elements have disappeared. But at the same time, some of these have been around for decades, such as File Explorer . Of course, there are many other third-party solutions that are alternatives to this one, such as Files.

Keep in mind that an operating system as important as Windows has been around for a long time, in addition to several versions. These have been more or less successful or accepted by users, with Windows 7 and XP being the most beloved. All this until the current Windows 10 . As we mentioned, elements such as the File Explorer of the Redmond system have been around for a good number of years. This helps us to work in the best way with the files and folders that we handle on a daily basis.

And it is that this element has remained there, all despite the innumerable changes that have occurred in Windows. To this, for example, we can add other veterans such as the Control Panel, the Task Manager, the Device Manager, etc. But it is also true that since its appearance, times have changed a lot. In this way, technology has evolved and both the use and the appearance of certain applications have adapted to the times.

What advantages do we find when installing Files in Windows

Precisely for all this, at the moment many users request a change in some of these functions, as it happens with the Explorer. Although there are several additional functions that this element brings with it, there are users who ask for much more. That is why over time many choose to use third-party solutions. Well, the Files program that we are talking about here is an excellent alternative to the native File Explorer .

It is precisely this application that we are going to talk about in detail right now. The first thing we should know about this alternative to Windows Explorer is that it is a UWP application. This means that, in the first place, we download it from the official store of the system with total security, the Microsoft Store . At the same time it has been designed, both aesthetically and functionally, to adapt perfectly to Windows itself. 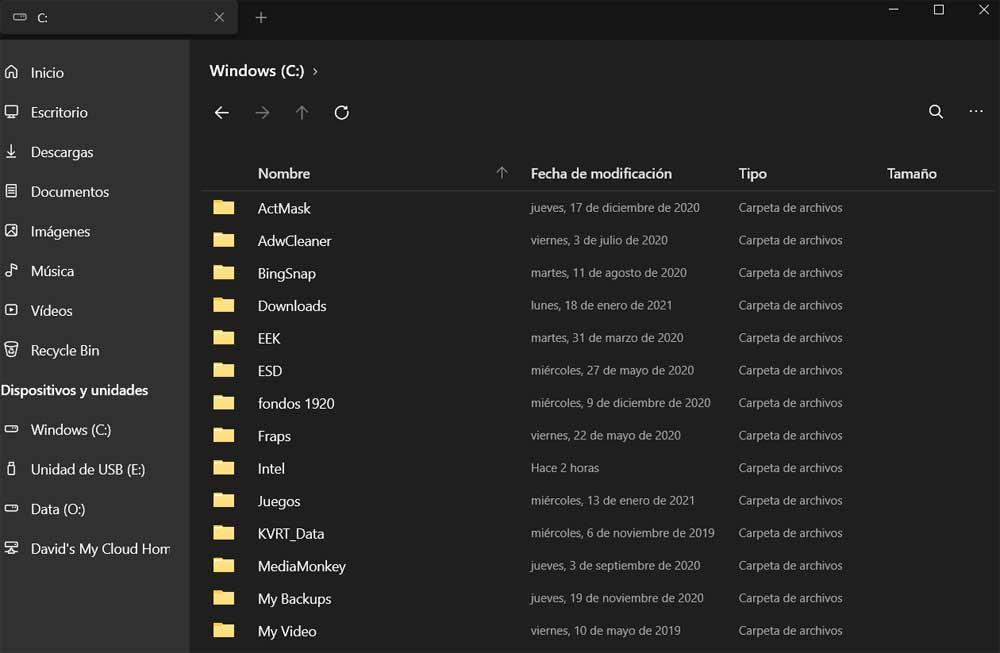 In fact, as soon as we start the program as such, we find a user interface somewhat different from the one we are used to. Of course, it was designed to help us manage our files and folders with total comfort. To give us an idea, here we talk about a free open source UWP File Explorer that brings us many of the things that are asked of the original Windows 10 function.

It is also important to know that it is a project that is starting right now, so it still has a lot to improve and grow.

Well, once we have it up and running, say that this is a program that in its interface we find two well differentiated panels. On the left side of it we find a series of shortcuts to important and used drives and folders. At the same time, from the Start section, in the right panel we will see the used and available space of each of the units, both local and remote.

All of this that we are discussing, designed with the usual Fluent Design panels to adapt to the rest of the operating system. Then, as we move through the drives and disk locations, the right panel is the one that shows us the indicated contents. Say to interact with both files and folders with the right pane, the fastest method is by right button of the mouse on it.

At that moment, a contextual menu appears on the screen full of options to choose from. Obviously we have the usual cut, copy or delete, but there is much more. For example, from that context menu, we can play directly in VLC, open the folder in TreeSize to see its size, pin it to the main panel of the interface, or even open it in another tab.

The options for interacting with other installed programs vary depending on the type of file or folder that we have selected.

Other useful functions of File

And it is that at this point we will tell you, to the joy of many, that the program we are talking about has support for working with tabs . This allows us to open multiple locations and units in a single window . In fact, it is a feature that many have been asking for for the native Windows Explorer.

In addition, the program has a very powerful file browser, and allows us to open content directly in a CMD terminal . Another function that we can activate in this application is the use of a double panel, both at the start and in the new tabs independently. 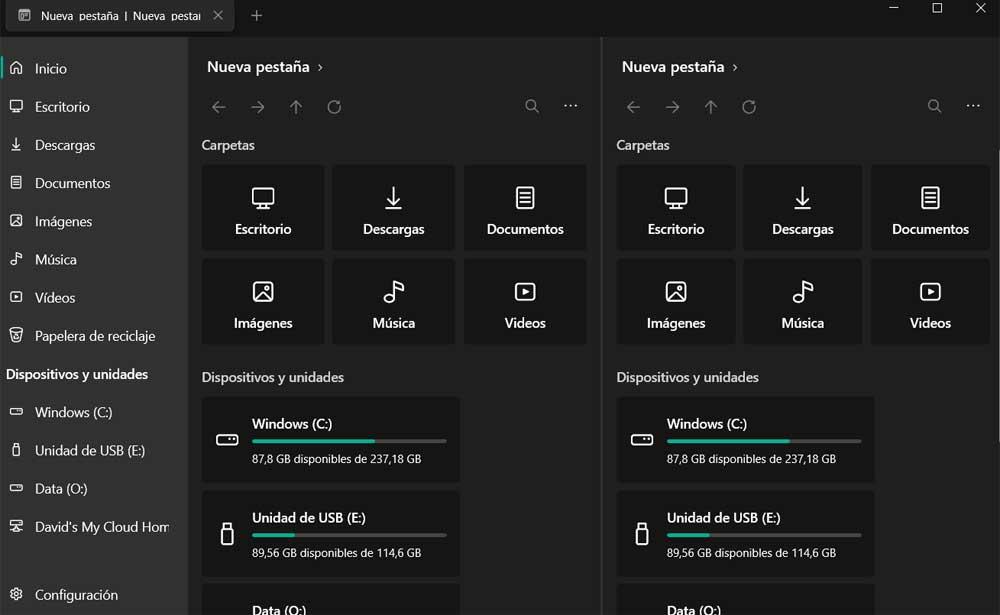 All this will help us to work faster and more effectively with all our content stored on the computer.

In the lower left corner we find a button in the shape of a cogwheel that gives us access to the program settings. Here we can customize a multitude of sections of the program such as its appearance, what to show at the start, the behavior of the mouse when opening content, etc. 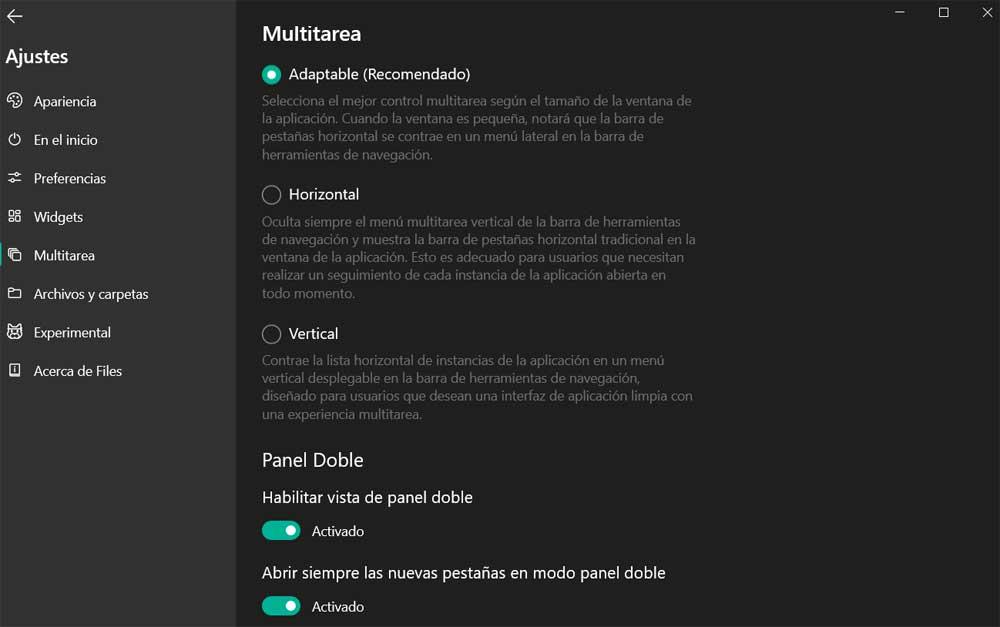 At the same time from here we activate the double panel or some of the shortcuts to elements such as CMD or PowerShell . In fact, the best we can do is move around this program a bit to get used to its use and discover its advantages.

As we mentioned before, we are facing an open source UWP application that acts as an alternative to Windows File Explorer . Here we find some very interesting functions, in addition to an interface more in line with the current Windows 10. Therefore, in order to benefit and try everything we have told you, you can download the program for free from the official system store. 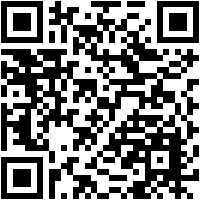 Alternatives to File as File Explorer

This is one of the most popular proposals as a replacement for Windows Explorer. To say that it has improved substantially over the years, it is free, and it presents a huge functionality for these tasks. We are talking about a portable application that you can download from here and it has work through tabs.

Another well-known proposal of this type in the sector is this: MultiCommander has an installable version and a portable version that we can download from here . We will have a user interface based on tabs and a good number of buttons for direct access to other functions. It has a function to rename several files, among many other interesting things. 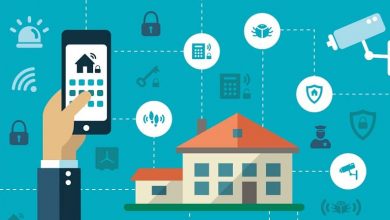 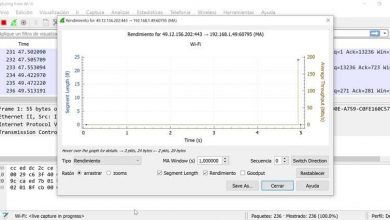 Analyze all network traffic entering and leaves the pc with wireshark 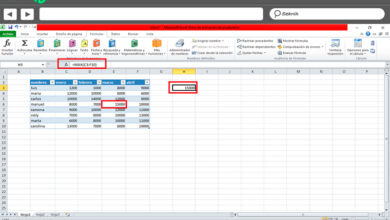 Min and max features in microsoft excel what are, for what it is for and how to use them to find determined values? 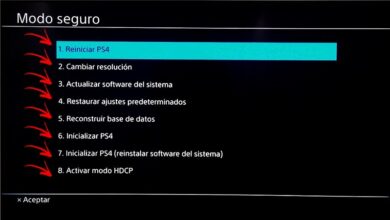 How to reset a ps4 and restore the configuration to the factory values? Step-by-step guide

How to see the status of your contacts on whatsapp? Step by step guide 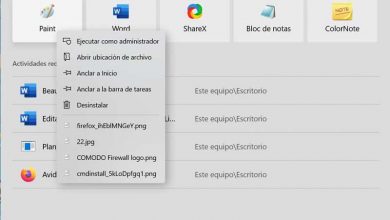 Change the look of the windows search bar with beautysearch